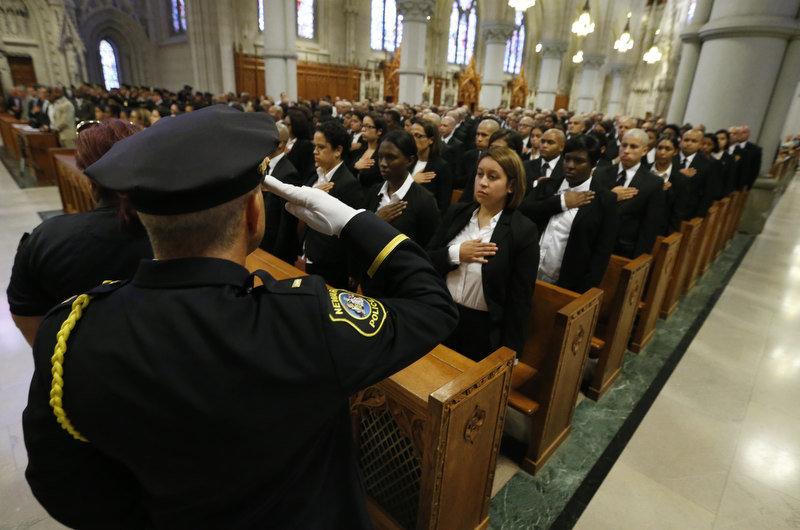 NEWARK — They sat in rigid rows inside the hallowed halls of the Cathedral Basilica of the Sacred Heart, hopeful this moment would mark the beginning of their journey toward joining the men and women of the Newark Police Department.

On Friday, 200 of the police department’s newest recruits were welcomed by top brass from the city and state — reminded of their crucial roles in New Jersey’s largest city.

“This group of police recruits, the largest in the past 10 years, will receive advanced training in protecting residents and will become an integral part of the communities they serve,” Mayor Ras Baraka said in a statement. “They will grow to understand that their job is to treat residents the way they would treat members of their own families.”

The city has been relentlessly trying to beef up its police force after layoffs in 2010 slashed the ranks by more than 160 officers.

“I am delighted that we are steadily replenishing our numbers following the layoffs and attrition that occurred in the police department since 2010,” Public Safety Director Anthony Ambrose said. “The hiring of new police officers is part of our strategic plan to strengthen the division and to make Newark safer.”

City officials reported a 13 percent reduction in overall crime last year compared to the year prior and a 10 percent decrease in violence over the same time period. At its peak, the department numbered 1,700, officials said. Newark currently boats 1,049 officers.

The recruits will be trained for 26 weeks by the New Jersey State Police at its training academy in Sea Girt. Training begins Aug. 7 and those who pass will graduate in December.

“It will not be a day at the beach, it’s going to be hard, it’s going to be difficult,” New Jersey Attorney General Christopher S. Porrino told the recruits, who were dressed in black suit jackets and blazers. “You must keep your eyes on the goal and the goal is to get through so you can join one of the most elite police forces in the country.”

The group hails from Newark and includes 65 women, officials said.

“The recruits will participate in extensive training focused on urban policing, domestic violence situations, and cultural diversity,” Colonel Rick Fuentes, Superintendent of the New Jersey State Police said in a statement after the ceremony. “The investigative techniques and tactics they will learn will remain with them throughout their careers.”